Learn the history of the Engine Shed, a restored Victorian locomotive shed, now home to the University of Northampton Students' Union

In the present day millions of tons of goods are moved about the country by lorry on Britain’s roads. Prior to the 19th century the main way to move goods was by boat, either by sea, river or canal. One Britain’s towns began to be connected by rail in the 1800’s, companies were quick to see the potential for moving huge quantities of goods long distance by train. Alongside passenger stations, companies built large goods yards for the handling of freight.

Goods stations were usually equipped with large sheds for loading/unloading and storing goods. Large to medium size goods stations also had extensive yards with sidings for marshalling and shunting wagons. Here freight containers could be stored or organised for further movement.

In 1872, contemporary with the construction of the Engine Shed, the Midland Railway built a large goods yard to the west, in the area known as Cotton End. This included a set of goods sheds built in the similar Midland Railway polychrome style, but significantly larger than the Engine Shed. It consisted of four lines, which would have run into the sheds, each of which would have contained docks for the loading and unloading of freight. There was also a large grain warehouse which is the only survivor of the yards today. The shed complex also included office for overseeing the operations of the yard, and stores for equipment. Outside the shed there was also a weighbridge, a large set of scales designed to measure the weight of freight.

The rest of the yard itself was a complex network of lines which serviced businesses adjacent to the goods yard. This included the Northampton brewery Co. stores, Smiths Timber Yard and saw mill, and the Nene Sulphate chemical works.There were also oil tanks in the yard for the General Petroleum Co. and the Caucasian Petroleum Co.

The yard also included a dock for holding cattle being transported on the railway and a watchman’s office. After the formation of the London Midland Railway in 1924 they replaced the old Midland Railway offices with a new office building on the western end of the yard, facing Bridge Street. This office building is still standing and is now flats.

The southern part of the yard included a large complex of stables for the Midland Railway drays – large, powerful horses whose job was to pull goods carts around the town. Before the development of the motor car, horse and cart was the only way to move goods once they had made it to the goods yard. Right up until the 1950’s the railways companies in Northampton used horse and carts in this way. 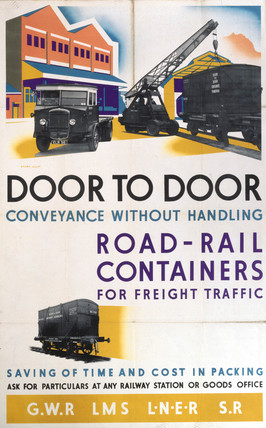 By the 1940’s the LMS had much more sophisticated lorries than that in the picture above. Some of the stables were converted into a garage for the delivery vans which were increasingly taking over from the horses.

To the south of the goods yard was what was known as the Permanent Way Depot. This was built in 1914 and was an engineering yard for the preparation of track infrastructure. This included a gigantic travelling crane.

By the 1960’s competition from road haulage companies meant that the use of railways for moving goods was in steady decline. British Railways found it increasingly difficult to compete, particularly after the huge reduction of the network by Dr Beechings’ ‘axe’. This goods yard was one amongst many that were deemed surplus to requirement and it closed in 1969. It was used as a warehouse by a furniture company for many years, until it was closed and demolished to make way for housing development in the early 2000’s.